Up until yesterday I thought it was an old tradition of the past; some obscure thing I had read about while doing research on Christmas when I first moved here. Then when sitting around for morning fika on Friday, my co-worker mentioned she was going to a Julgransplundringsfest (“Christmas tree plundering party”) this weekend, which piqued my interest.

Tomorrow, the 13th of January, or the twentieth day of Christmas as we call it (“Tjugondedag” or “Tjugondedag jul” or “Tjugondag knut” or “Knutsdag”), is the last day of Christmas here in Sweden. Unlike the majority of other countries that put away their decorations on Epiphany, the 6th of January, we get one more whole week with ours! Its not that we don’t observe Epiphany here; we do (even though Sweden is a secular country with 55% of the population reporting as “nonreligious”). In fact, its a national holiday called “Trettonsdag” (“The thirteenth day” as in the 13th day of Christmas- not to be confused with the “twentieth day” which falls on the 13th of January…confused yet?) Instead of taking advantage of that national holiday (which means most have day off of work) to take down Christmas decorations, its tradition to wait a week until Knutsdag (Knut being the name of a Danish king, later declared a saint, who would notoriously ask farmers to help him wrap up holiday season). 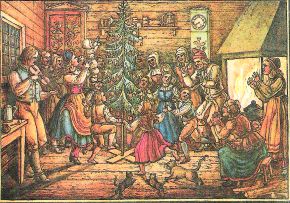 So, what does one do on knutsdag or at a julgransplundring aside from putting away their decorations? It’s a little more special than that, because you are saying farewell to Christmas. In the old days, children would run to their neighbors to “ropa ut julen” (“To call out Christmas”) essentially declaring its over, and while doing so they would be asking for any left over food and drink from the festivities. It was a day where one would “Kasta ut granen” (“Throw out the tree”) quite literally throwing the trees from windows and balconies, littering the street. Nowadays, its a phrase still used but its done in a more organised manner (and more people own reusable artificial trees). If dumped correctly, some towns use the discarded trees for the bonfires at Walpurgis Night (Valborgsmässoafton) in the spring. 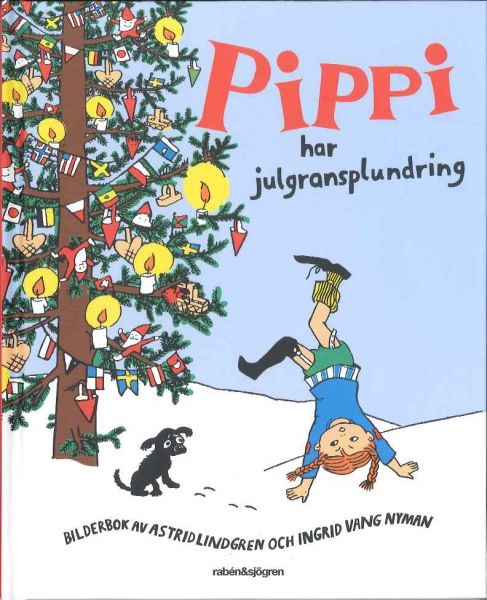 So, what is Julgransplundring? And how does one plunder a tree? Its simple, it all depends on what you put on the tree to begin with. It’s where you get together and feast upon all the edible stuff you hung up on the tree a month ago, or decorated with in general. This is also known as Julgransskakning (“Shaking the Christmas tree”). Its time to eat all the candy canes (polkagris), apples, chocolates, caramels, candy ornaments, and of course the beloved gingerbread house! Some households might even cook Christmas food (again!) to enjoy one last time.

The looting of everything edible left over from Christmas can also be accompanied by songs and games.

There’s also the tradition of Dansa ut julen “Dancing out Christmas” which means to dance around the Christmas tree before you toss it out the window (or store it in the attic) to say goodbye to the Christmas season. Some towns in Sweden even hold a public event for the occasion:

Join us dance out Christmas! Maud Mithande leads the dance around the tree, there will be free warm drink and gingerbread cookies and every child gets a candy bag to bring home”

I got a call a few minutes after midnight last night from my brother wishing me a Happy New Years. He left a voicemail and while doing so, perplexed himself – and me –  with the following realization “Hey Meg, just calling to wish you a Happy New Year! I know the ball just dropped by you….wait – do they drop a ball there? What drops? What do you do?”

Honestly, I didn’t know. How DO you celebrate New Year’s Eve in Sweden? I’ve been living in Sweden for 8 years and wasn’t really sure what constituted for being Swedish tradition since tradition is local to the cities or towns you live in and the households you grew up in, or shaped by the company you keep. 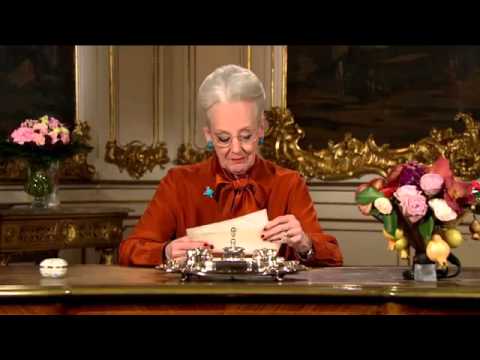 For the past 5 years we’ve celebrated in Denmark with a group of friends– the tradition there being to watch the Danish Queen give her speech about the year that passed and the year to come (and a friendly drinking game to take a sip every time she messes up saying what she is trying to say). Every year I understand more (with subtitles on, of course) and enjoy the tradition more, not needing to wait for the cue but hearing/reading the subtleties myself. I always like listening to the speech, the drinking part is just a fun way to get the party started.

But alas, this year we were sick and had to stay home – so a last-minute Swedish New Year’s celebration it would be, just the two of us and a lot of tissues. So, what DOES drop in Sweden? I mean, I know we don’t have a giant glowing 700-pound disco ball descending down a huge flagpole like the one in Time Square, but what do we do instead? My first thought was that surely our royal family also has a speech on New Year’s Eve, but no, no they do not. This is instead done on Christmas, apparently. I’ve never actually watched it – or knew about it until writing this post. Something new to do next year.

And so, I reflected, I pondered, I asked, I googled, and I procured a little list – How DOES one celebrate New Year’s in Sweden?

The Watching of the Dinner 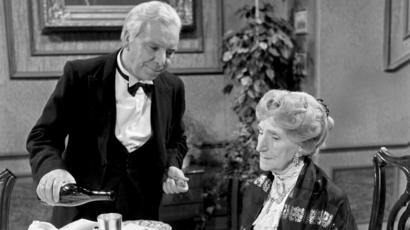 “Same procedure as every year”

It turns out that Sweden and Denmark DO have a New Year’s tradition in common: watching the short sketch “Dinner for One” about an upper-class Englishwoman having her 90th birthday party dinner with her now deceased friends, in which her butler pretends to be each of them – and thus drinking for four people. “Grevinnan och betjänten” (The countess and the butler) has been aired every year in Denmark since 1980 and in Sweden since 1969 (banned in Sweden from 1963-1969 due to the heavy alcohol consumption).  Our friends in Denmark were surprised that we were watching it so early here in Sweden, at 19:45 (7:45pm), while it is aired later there – making it easier to drink along with Miss Sophie and her four “friends”.

The Reciting of the Poem

New Year’s eve is a celebration, everyone knows that. There’s always live music and concerts being aired on television to kick off the upcoming year. A few minutes before the clock tolls midnight, we are met with a somber reading of a classic poem “Ring Out, Wild Bells” (called “Nyårsklockan” in Swedish). Written by a British poet in 1850, the text was translated and introduced as a Swedish New Year’s tradition in 1895. The translation is a lose one, having taken many liberties with the text, cadence, and structure – making it more it’s own.

From 1895-1955 the poem was almost exclusively read by the same actor, when he died the tradition was put on hold until 1977/1978 (when “Tolvslaget på skansen” first aired on SVT, Swedish Television). A total of four actors recited the poem from 1977-2014, when the tradition was changed to having a different actor each year instead.  Each person having their own way of reading, leaving something new to discuss each year (some omit certain lines, some time it perfectly with the bells tolling at midnight, others ending too early or too late – making the toast and countdown a wild card.

The Lighting of the Sky

Around midnight is when the magic happens. Fireworks, that is. That’s the biggest way Swedes show that the New Year has arrived. Not confetti, not honking horns, not banging on pots and pans, not balloons. Just a ton of fireworks lighting up the night sky. It might not be unique, but it does mean bringing in the new year with a bright colorful bang. Come midnight you’ll see balconies filled with spectators waiting for a light show. Until recently, fireworks have been easily available to purchase in Sweden. Just this year (june 2019) certain types became more regulated, requiring obtaining permits and attending special training courses to be able to buy and use…but we didn’t notice a difference.

The Throwing of the Shoes

An old tradition that I’ve only read about. My husband confirmed that he has heard about it and maybe even done it as a child – so I don’t know how relevant this one is, but I’m gonna include it anyway! Come midnight everyone is to throw their shoe at the door and see how it lands. If your shoe falls facing the door it can mean moving or change.

The Listening of the Song

This is by no means an actual tradition, but it couldn’t go without mentioning because surely “Happy New Year” by Swedish pop band legends ABBA must get played more in Sweden than anywhere else on New Years Eve (I have no statistical data for this, as it is just for fun)

Today is the fourth advent, the last Sunday before Christmas, the day for lighting the fourth and final candle of the adventsljusstake. Christmas is almost here.

Four Sundays before Christmas (somewhere between the 27 nov -3 dec) the long, dark, cold nights leading up to winter solstice are brightened by the appearance of glowing Christmas stars and advent decorations illuminating the windows of almost every store, office building and home. While walking down any street at all, the collective and uniform effect of all these lights creates the magical, warm coziness of Christmas.

The electric advent decorations are typically five or seven lights instead of four, giving a symmetrical triangular shape, perfect for displaying in windows.

And so, the first advent candle is lit – but not for too long, it has to last for four weeks. Glögg med russin och mandel (mulled wine  with raisins and almonds) is warmed on stove-tops and enjoyed with pepparkakor (gingerbread cookies) and lussebullar (Saffron buns). Advent presents are stuffed into stockings each sunday leading up to Christmas, building to the anticipation.

The well-known tradition of advent calendars is taken one step further than the joy of opening  cardboard windows to reveal a piece of chocolate everyday. On the first of December stores reveal their version – a julkalender (Christmas calendar) to showcase what super-deals they have to offer each of the 24 days. The local TV channel TV4 has a tradition of airing a different “Julkalender” every year – a mini series with a new episode each day at the same time (25 minutes) for the children (and adults) to enjoy while waiting for the big day to arrive.

How do you celebrate the advents? We dedicate these sundays to christmas-y things: putting up and decorating the Christmas tree, going Christmas shopping (most stores are closed on Sundays in Sweden – but are open on the advents!), visiting julmarknad (Christmas markets), watching Christmas movies, having a plate of traditional Christmas food at home or going to a restaurant for julbord (Christmas table), wrapping Christmas presents. All while enjoying the coziness of the advent candle(s) and the tastiness of glögg.

Semlor day is here again! Read all about the history, meaning, and traditions of Fettisdag and semlor (And a review of the best semlor in Halmstad) in last years posts: HERE and HERE.

This year, learn how to make your own beloved Swedish classic! c’mon be a little Swedish! These sweet buns are eaten until Easter, so you have time!