Yesterday was the start of the longest holiday season: Advent. It was the fourth Sunday from Christmas and it’s a big deal in Sweden. 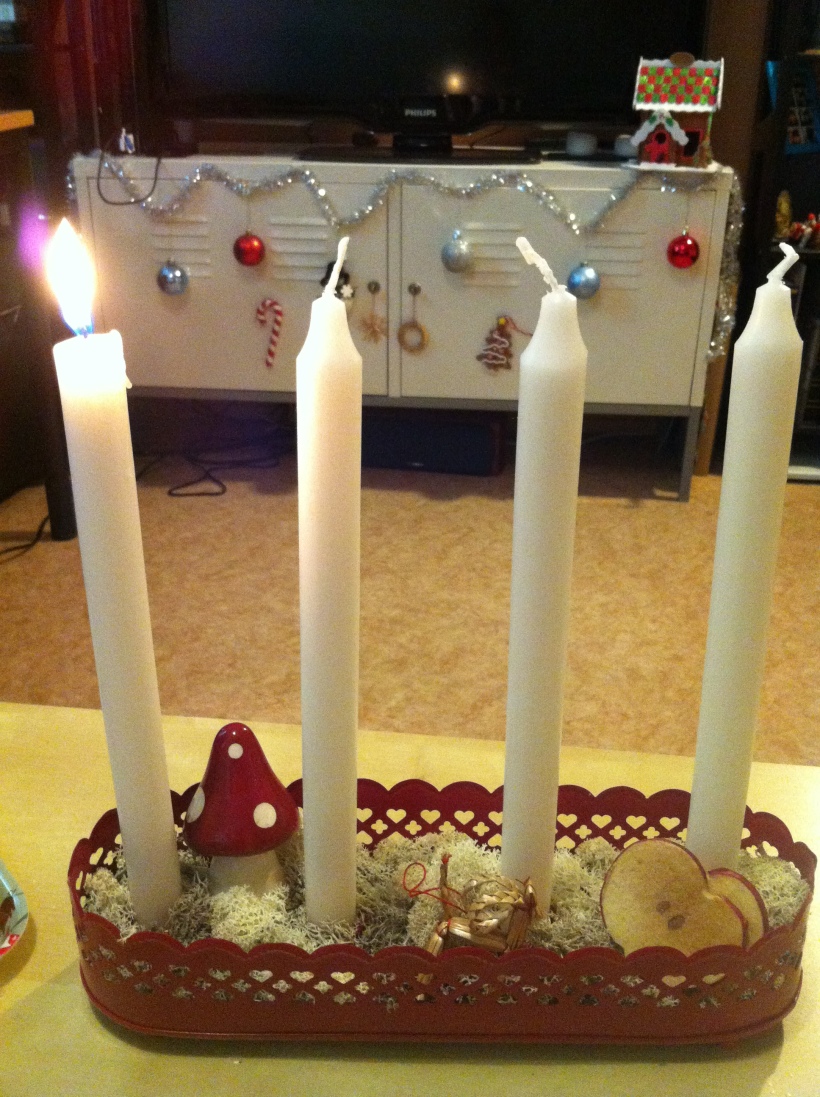 Every Swedish family (I would assume) has Advent candles that they light gradually every week, creating a staircase effect. Yesterday we lit the first candle. Most traditional advent candles have an area where moss and decorations can be arranged. Everyday in town square you can find stands selling this moss, along with wreaths, decorations, pine branches, and advent candles: 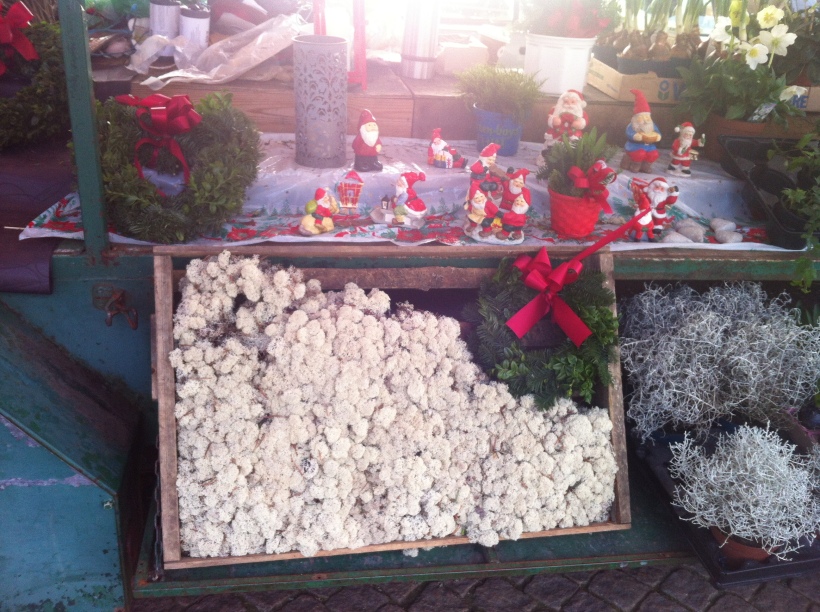 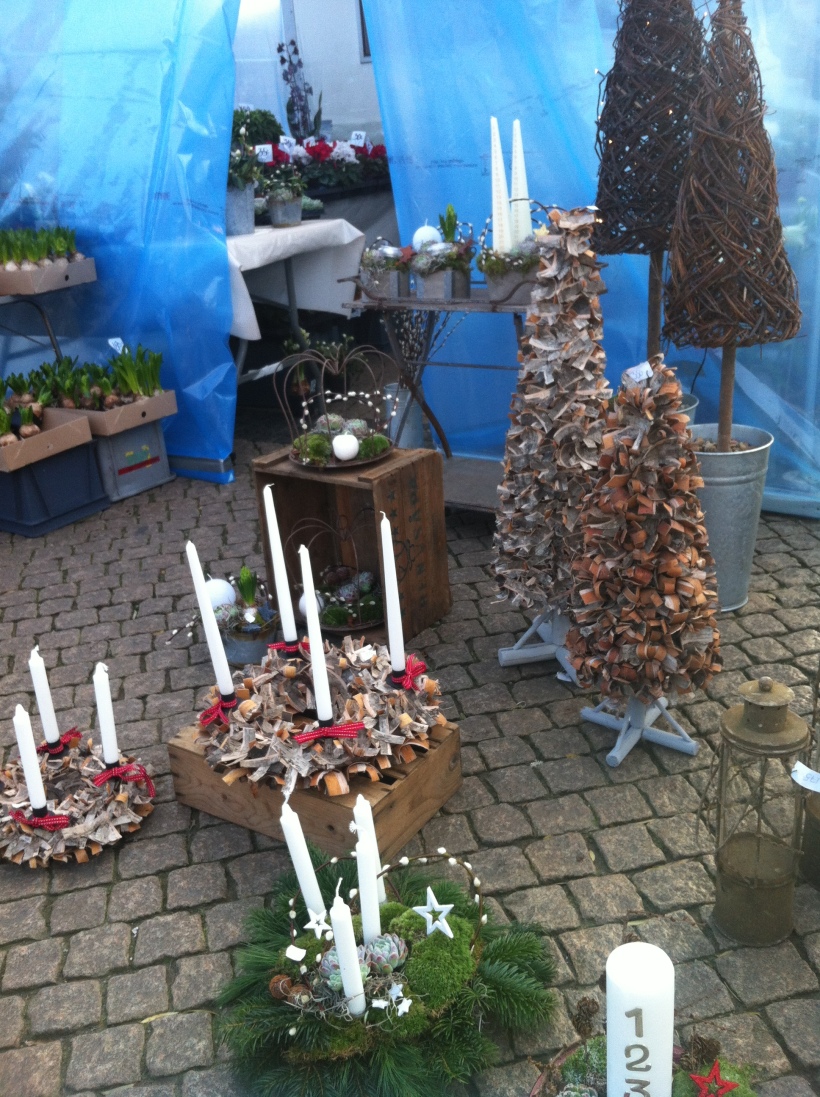 Another type of Advent candle that is lit a little bit each day: 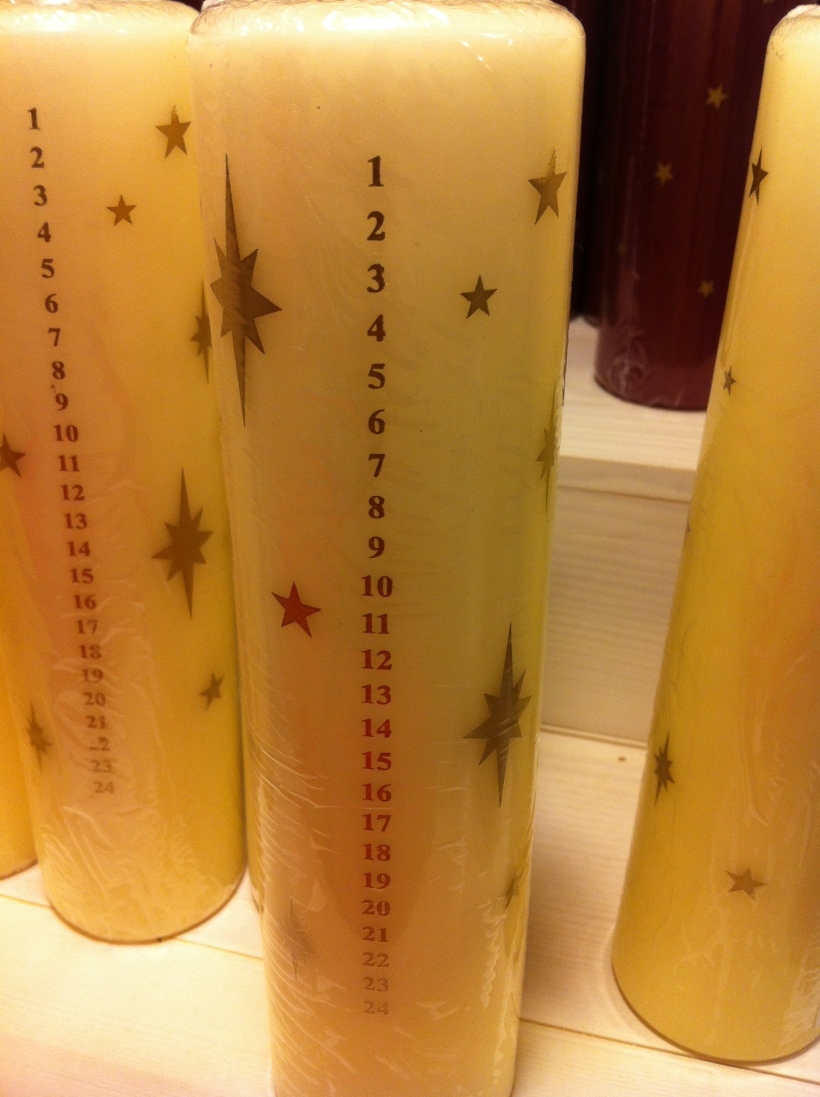 To celebrate the first advent, there was a Christmas market from 2pm-7pm filled with homemade items and foods to buy as Christmas presents. 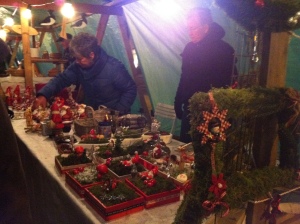 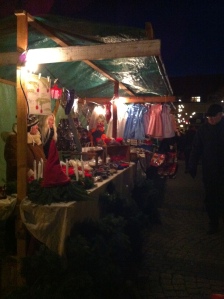 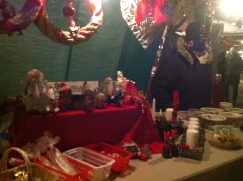 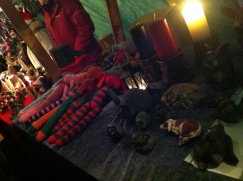 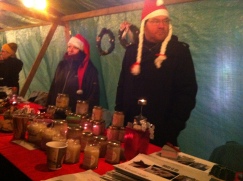 Many of the people selling things were wearing Santa caps. Even the horses and hot dog vendors: 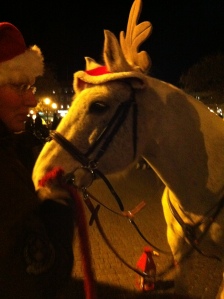 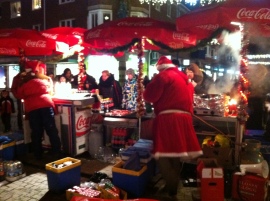 During the Christmas market there were things happening all throughout town. There was caroling and music, horsey rides

and face painting for the kids, dancing around the Christmas tree, free gingerbread cookies and glögg, an Advent concert at the church, and the town’s Lucia was crowned. Lucia is a very big holiday here, which I’ll write about in about a week. It was too cold to stick around and see everything that was going on, unfortunately.

Despite the below freezing temperatures (-7°c/20°f) and the night time darkness at 4:30pm (it felt like 9pm), it was the most crowded I’ve seen Halmstad. These two things are also the cause of only a few low quality photos, my fingers were a bit too frostbiten. (See said finger in photo below) 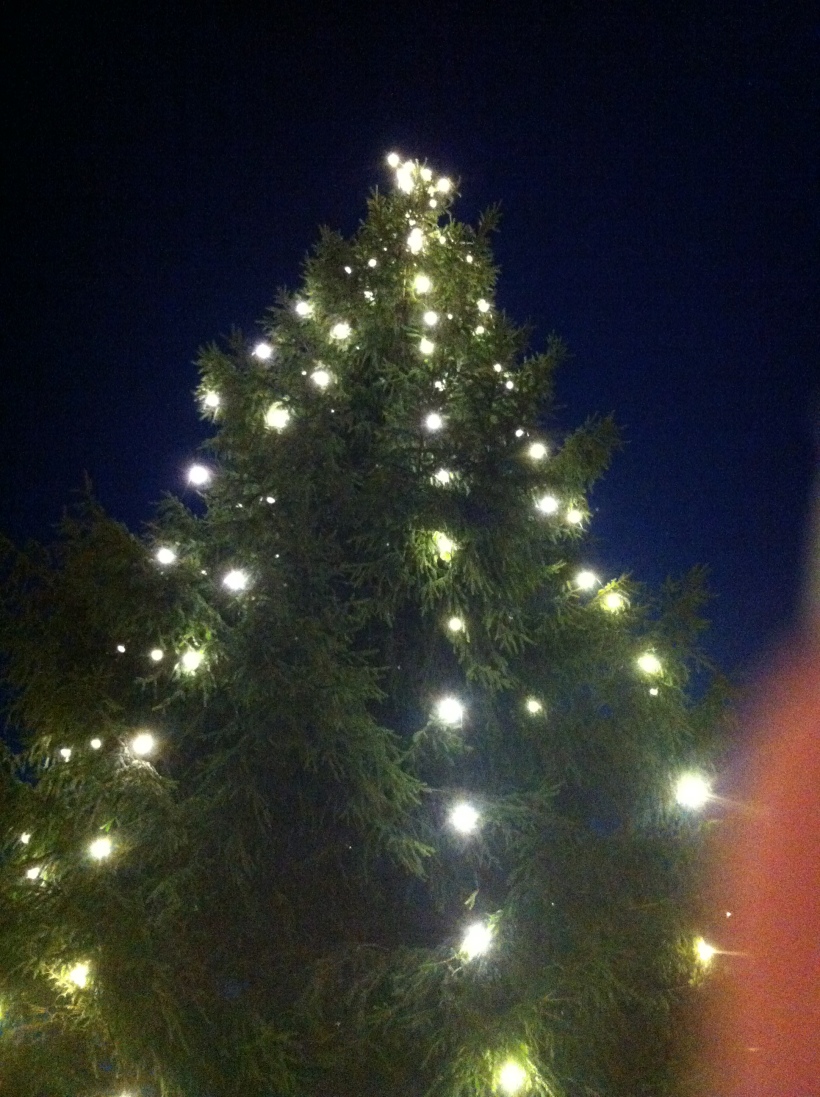 Traditionally, the first advent was also the day that stores revealed their Christmas window displays and decorations – meaning all the stores in town are open ON A SUNDAY! Nowadays, most of the Christmas decor has already been displayed, but the stores open their doors anyway. It was unbelievable how many people were out shopping yesterday, to the point that it was difficult getting in and out of places, without any special sales – just because it is tradition. (And exotic to shop on a Sunday!) 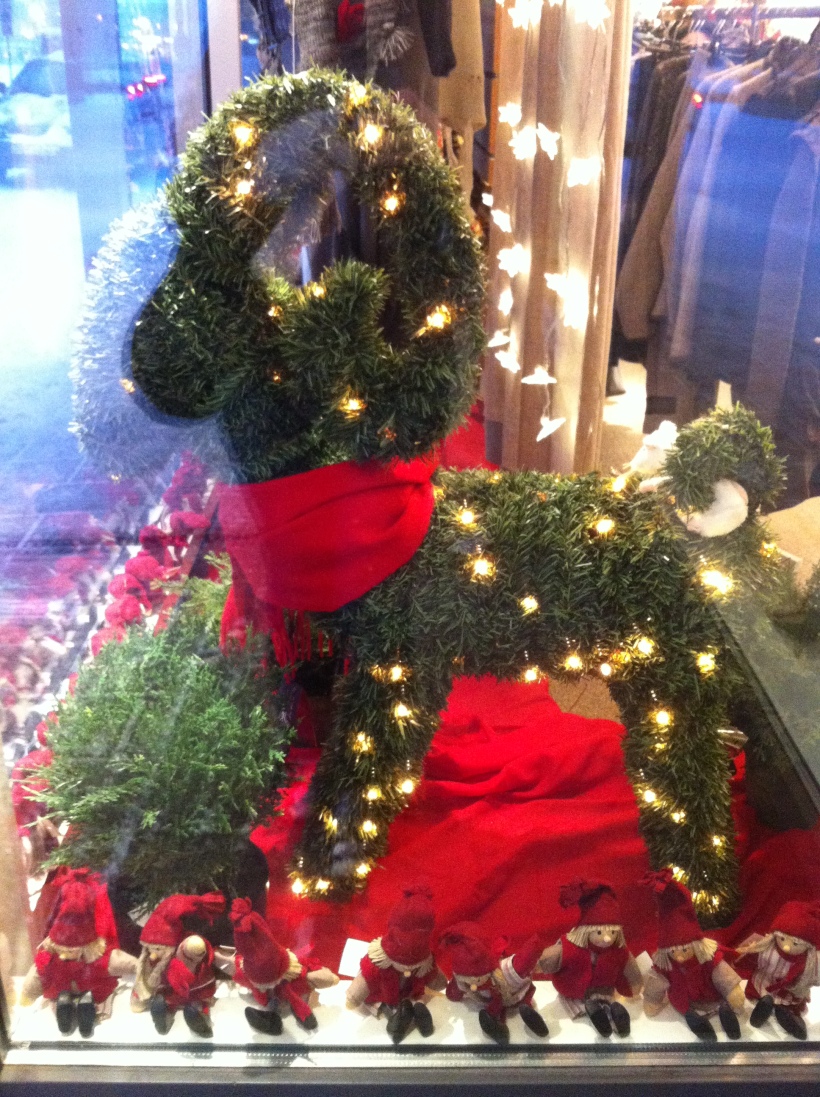 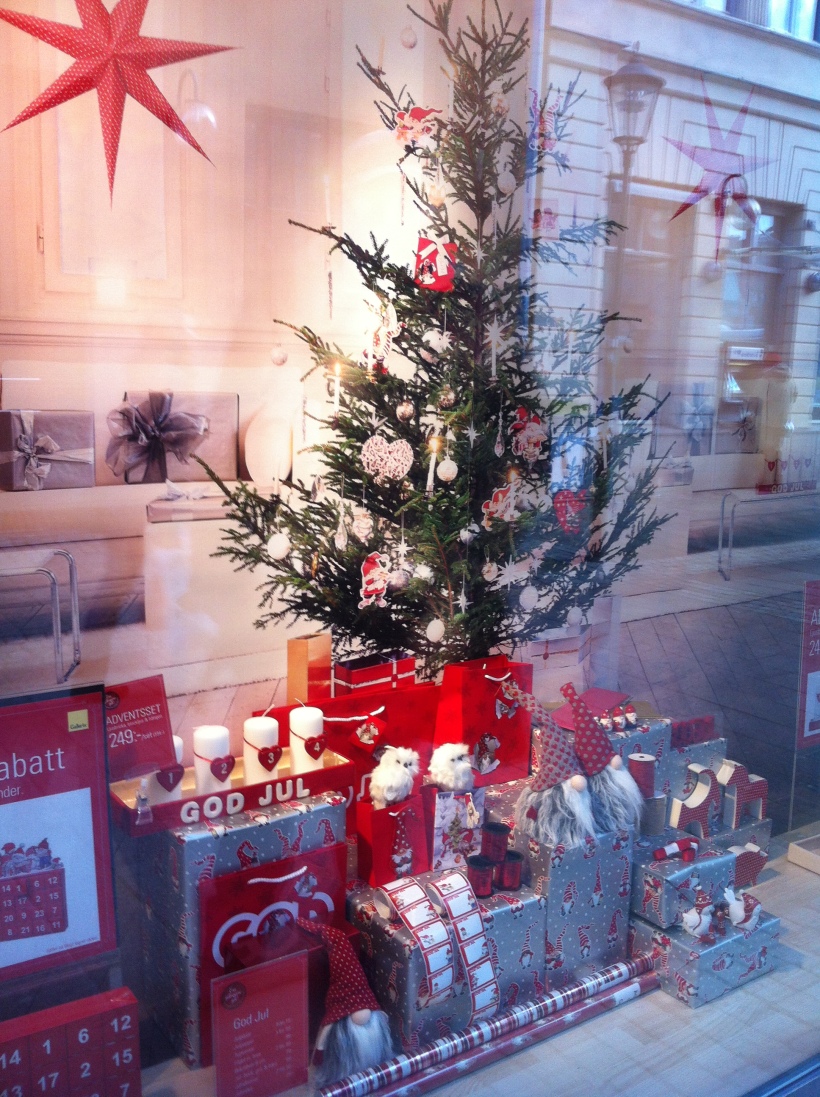 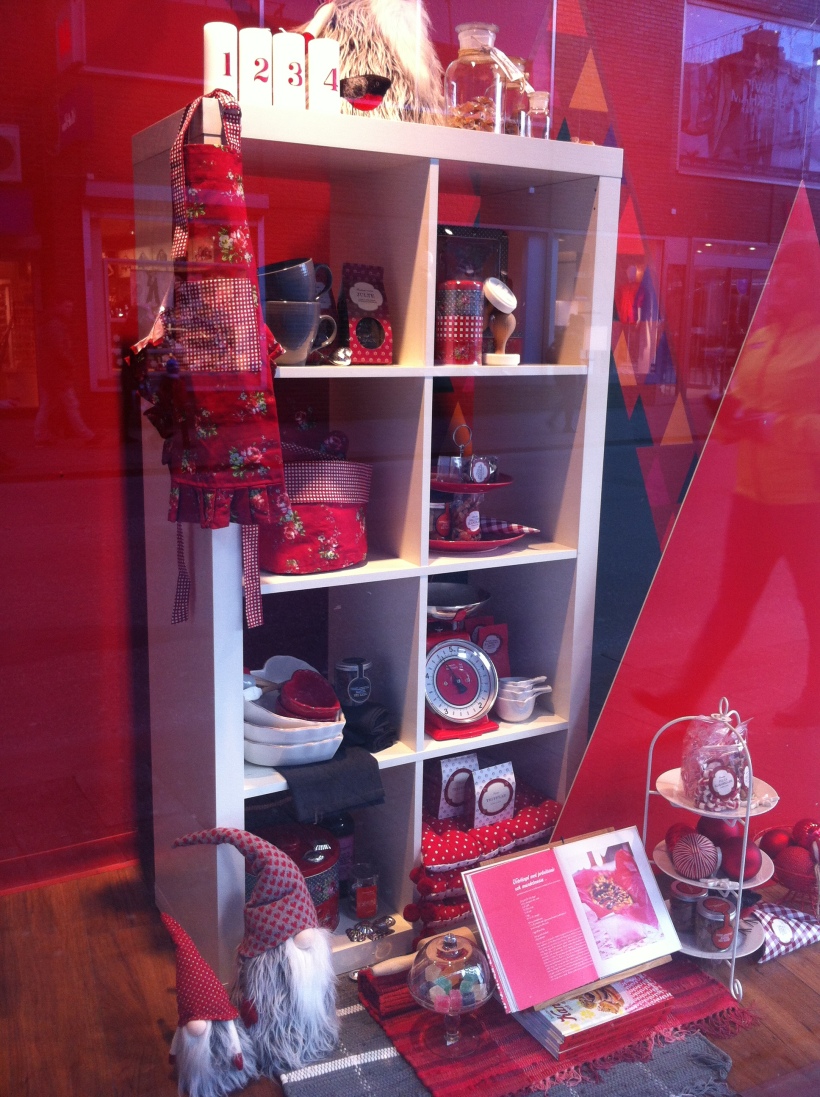 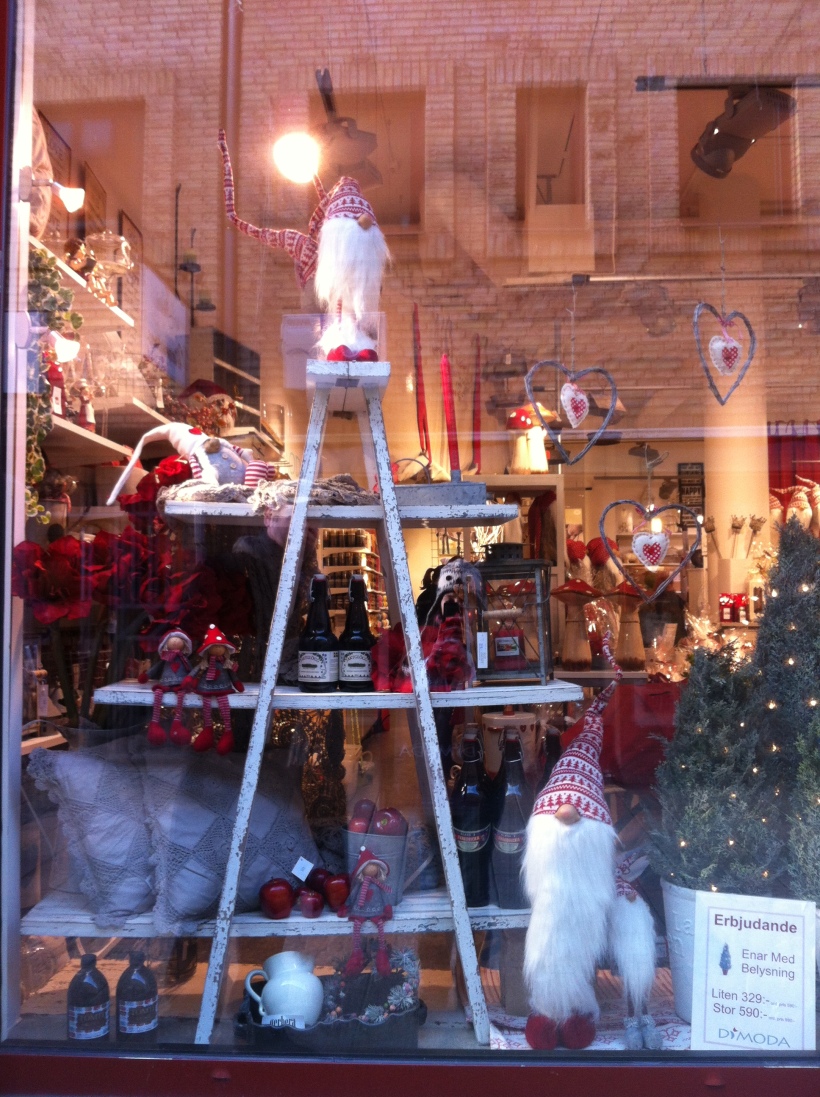 This count down to Christmas became popular in the 1930’s in Sweden, without so much emphasis on the religious origin; the “coming” of Christ. Instead it gives the country a reason to celebrate and be festive. Special Advent decorations are in all the windows, advent calendars are opened, candles are lit, and even an annual advent 24-episode kids show is used as a count down to Christmas. By the first Advent, Southern Sweden only has 6-7 hours of daylight, so the extra decorations, lights, candles and festivities are a huge plus for moral. For Northern Sweden, where the sun doesn’t rise above the horizon, this time is also a count down to the Winter Solstice on December 21st, when the daytime sunlight will return. “It will soon turn,” is supposed to be a common greeting in Northern Sweden, waiting for the Winter  solstice to come and bring back daylight. 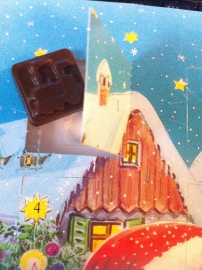 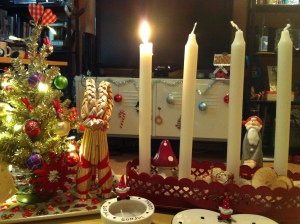 12 thoughts on “The First Advent & A Christmas Market” 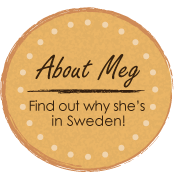 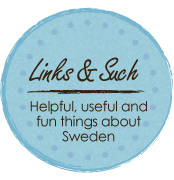 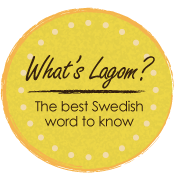 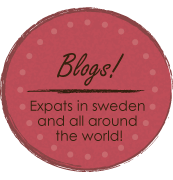